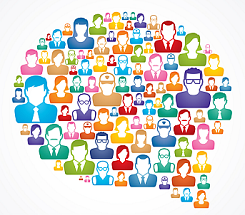 This blog was written by Sarah Ainslie for client Calder Security Ltd. To see the original post click here.

The role of social media in reducing burglary.

We often hear that the sense of community isn’t the same as it used to be. That we don’t really know our neighbours, that nobody looks out for people in the local area and that nobody would really notice if something was amiss with our homes. But is this really the case? I’m not so sure.

It’s certainly true that you don’t get neighbours standing and chatting over the garden fence or people popping round for a cup of sugar and you may not know too many of your neighbours by name but I think that community spirit is still there, it’s just taken on a slightly different form.

Social media can increase your vulnerability to burglary, through oversharing personal information about what we have and where we are, but it’s also a great source for sharing and has facilitated a new development in community spirit that is actively helping reduce burglary and other local issues.

Facebook groups and community based sites such as Streetlife are now incredibly popular as a way of sharing community events, news and discussions. The conversations that once may have taken place over the garden fence now happen online and with a much bigger audience. Members will predominantly be local residents but often also include community group members, local councillors and local business owners. I’ve seen people post news about burglaries and attempted burglaries in the area, reports of people calling door to door in certain streets, news from local PACT meetings (Police and Communities Together – community police and resident groups), warnings of scams operating in the area and even real time reports of incidents in progress! This can have a massive impact; showing people in a very real way what can happen, making them aware of specific threats in their area and demonstrating to residents, and potential perpetrators, that people are actively on the look-out in the community.

People may not know the names of their closest neighbours but they know a lot of people in the local area just through what they post on these social networks.

Even traditional community anti-burglary initiatives such as Neighbourhood Watch is using online methods to keep in touch as they now have OWL (Online Watch System) – an online platform for sharing information among members.

Burglary rates are reducing and while the police do what they can, with diminishing budgets this reduction must surely be credited to other factors as well. Online community networks such as these, the increased use of home security systems and being more vigilant about home security are all helping to tackle the issue of burglary.