This blog was written by Sarah Ainslie for client, Calder Security. To see the original post click here. 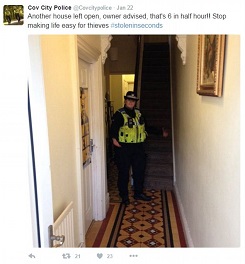 With almost a third of burglaries conducted via unlocked doors and windows, police forces are keen to get the message home and encourage people to lock up. However, it seems that one force has crossed the line and engaged in a bit of breaking and entering themselves to get the point across!

Coventry police decided to demonstrate the number of homes left unsecured by trying doors and letting themselves in. They then posted photos of themselves inside the properties on Twitter with the hashtag #stoleninseconds.

While their intentions may have been honourable, they faced a considerable backlash on social media with people pointing out that they had no right to enter homes without a warrant or belief that someone may be in danger, that it was an invasion of privacy and that it was irresponsible to publish photos of unsecured homes on social media where they could potentially be identified. See the story here.

In a statement Coventry’s Chief Inspector, Helen Kirkman, said “A significant proportion all burglaries in this area − in excess of 25% − are ‘walk-in’ offences committed by opportunists taking advantage of properties left unsecured. Neighbourhood police teams have been on patrol to deter such offences, look for suspects, and to offer crime prevention advice to residents. If they find a door or window left open, I think people would want officers to check everything is OK at that address and not to just walk on by.”

“We encourage our police teams to be proactive and creative in their use of social media to engage with the public and get messages across. We haven’t received any complaints from residents, but obviously we will take on board social media comments.”

The tweets have since been removed.

So, what do you think? A justified action to get the point across or a badly misjudged strategy?